Looking at the ups and downs of the crypto market in the first half of 2022 from the Q1 data?

On April 10, the OKLink Insights | 2022 Q1 Encryption Industry Report (hereinafter referred to as the “Report”), a master on the OKLink chain, was officially released!

Monetary policy and geopolitical factors have a significant impact

The report pointed out at the beginning that monetary policy and geopolitical factors are the two external factors that will have a greater impact on the crypto industry in the first quarter of 2022.

Since the end of 2021, the Federal Reserve and central banks have started a series of actions such as interest rate hikes and balance sheet adjustments. The tightening monetary policies of major economies have brought a certain negative sentiment to the crypto market.

In addition, the Russian-Ukrainian military conflict that broke out at the beginning of the year and a series of sanctions imposed by NATO countries against Russia have led to soaring prices of global agricultural products and energy supply chain products, increasing uncertainty and risks in traditional financial and commodity markets, and further transmitting negative sentiment. to the crypto market. With the Fed raising interest rates a foregone conclusion, the two sides in the conflict between Russia and Ukraine tried to resume negotiations, and the relevant negative sentiments were gradually digested. Therefore, the crypto market began to stabilize and rebound in the first quarter after two rounds of bottoming out.

At the same time, it is worth noting that under the overall pessimistic market sentiment in the first quarter, overseas institutions and listed companies are still optimistic about the long-term value of mainstream encrypted assets, and such assets have become an important part of the balance sheets of many overseas companies involved in the encryption industry. composition of assets.

According to OKLink data, MicroStrategy holds the largest amount of Bitcoin among overseas listed companies. The company has been hoarding Bitcoin since August 2020. As of the end of the first quarter of 2022, it held a total of 129,218 BTC worth $5.8 billion. It even exceeds the market value of MicroStrategy, and is three times the holdings of second-place Tesla. 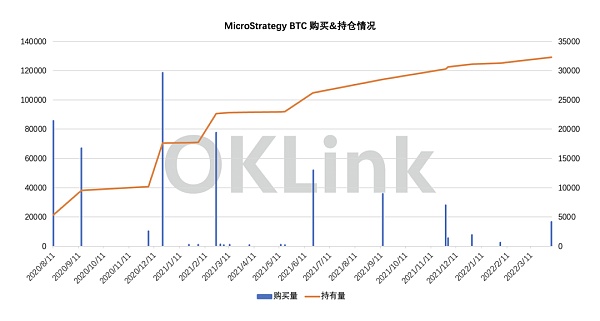 Welcome to the great era of Ethereum 2.0 and multi-chain prosperity

At present, the Ethereum public chain with the most active ecology, in order to completely solve the congestion on the chain and improve the scalability of the blockchain, is already moving towards the 2.0 stage, and the core change is the transformation from the PoW algorithm to the PoS algorithm. 2022 is the year that Ethereum plans to transform to PoS. This new upgrade means that Ethereum has taken a key step towards a world-class financial settlement layer and the underlying architecture of DApps.

Google Trends data shows that searches for “Ethereum Merge” hit a new all-time high in the first quarter, while searches for keywords such as “Proof of Stake (PoS)” and “Ethereum 2.0 release date” also all surged. , it can be seen that ETH 2.0 (now renamed the consensus layer), which has brought fundamental changes to the Ethereum network, really affects the heartstrings of the market.

Staking ETH is a key step in the evolution of Ethereum to the 2.0 stage. OKLink data shows that the number of ETH 2.0 deposit contract addresses pledged has exceeded 10 million. As of March 31, Ethereum 2.0 has received a total of 10,989,186 ETH pledges, accounting for ETH 9.30% of the circulating supply.

We may soon usher in an Ethereum that is vastly improved in terms of scalability, security, and sustainability.

But realistically speaking, the current high gas fees and congested network of Ethereum make some low-cost public chains (such as Polygon, Fantom, etc.) running on Ethereum EVM (the core underlying component of the Ethereum ecosystem) rather popular. .

It is worth affirming that, on the one hand, the non-EVM public chain provides a new entry for users and assets by adding EVM compatibility; on the other hand, by integrating widely accepted standards, it will bring more benefits to the global blockchain ecosystem. composability to accelerate the prosperity of the multi-chain era.