Cryptocurrency and other blockchain technologies are computationally intensive. Current blockchain mining rigs rely on hundreds of dedicated ASICs that consume kilowatts of power for computation. Converters used to power the ASICs must be space- and power-efficient to maximize density and minimize heat generation. After a quick review of this new class of applications, we propose a two-phase buck converter with a coupled inductor as the ideal solution to power the ASICs.

Blockchain technology is creating new markets and new applications. While cryptocurrency is still the dominant application, organizations like governments and industries around the globe have understood the value of this decentralized, incorruptible database that allows peers to conduct transactions without relinquishing control to an intermediary or accepting counterparty risk. Blockchain, especially applied to cryptocurrency or bitcoin mining, is computationally and power consumption intensive, requiring specialized computers like the ASIC mining rig shown in Figure 1. From a power management perspective, it is crucial to minimize power consumption in order to help the large mining pools that rely on crypto rigs to achieve efficiency below 40W per terahash (W/T). In this design solution, we review the state of this nascent market segment and propose a novel approach to powering an ASIC mining rig. 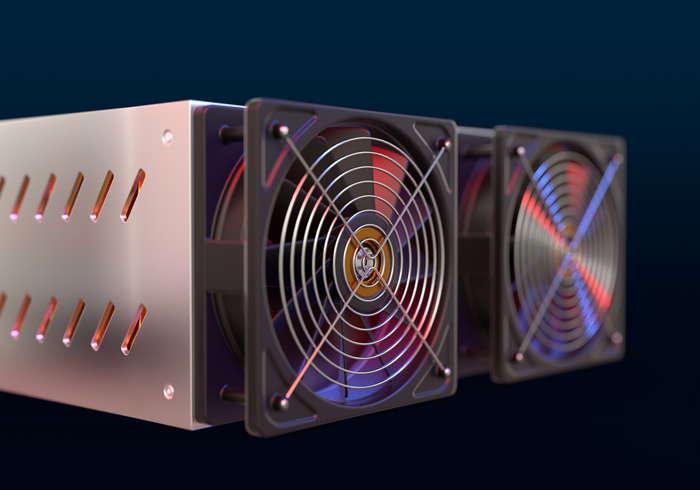 Blockchain as a secure distributed ledger technology, beyond cryptocurrency, enables a number of applications including IoT, supply chain management, healthcare, fundraising, etc. Their associated networks may have tens of thousands of nodes, each of which represents a potential entry point for hackers. With blockchain, a company can track security threats by assigning each node a unique key that allows it to immediately detect unusual behavior or hacker intrusions.

The current reliance of cryptocurrency on Proof-of-Work (PoW) for transaction validation has created concerns that this technology consumes too much power. Eventually, the move from PoW to Proof-of-Stake (PoS) should alleviate this concern and propel blockchain technology into the mainstream and beyond cryptocurrency mining. The graphic processing unit (GPU) has been the cryptocurrency mining workhorse for quite some time. This has affected both the availability and pricing of GPU hardware, especially since PC gamers and cryptocurrency miners have been battling for the same pool of graphics hardware. But as mining algorithms change and there is increased pressure for higher productivity in mining, specialized ASICs are taking the place of GPUs. 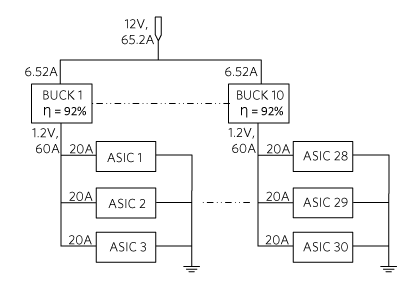 Figure 2. The power tree of one of three motherboards contained in the mining rig.

Each motherboard powers 30 ASICs with ten 60A, 1.2V buck converters, which each power three GPUs. 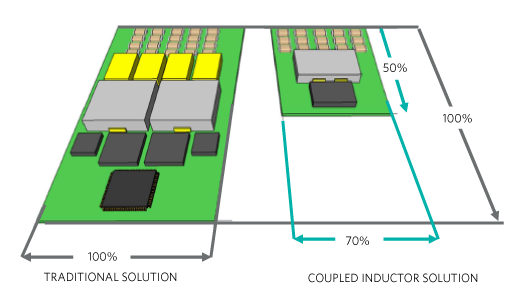 As an example, the IC shown in Figure 4 is a highly integrated two-phase buck converter. Using a fixed-frequency control scheme in conjunction with a coupled inductor, provides an extremely compact, fast, and accurate implementation for bitcoin mining applications.

Figure 5 shows the 60A implementation, which occupies a PCB size of only 17mm x 23mm (white rectangle). 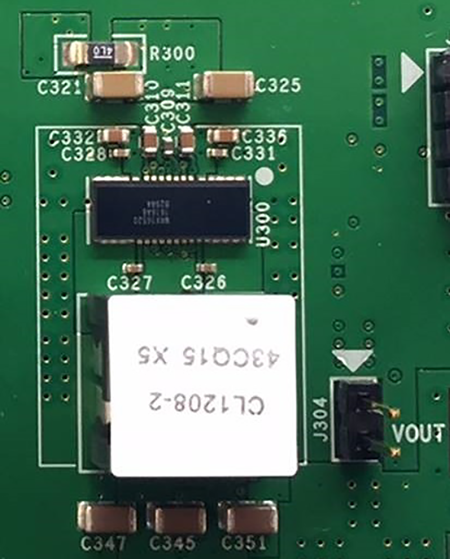 This solution has an outstanding 92% peak efficiency at 1.2V, with a 308kHz clock frequency and 12V input (Figure 6). 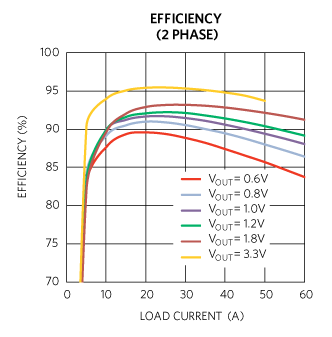 Blockchain technology is opening up new computing markets and opportunities. Cryptocurrency is at the forefront of this technology but requires huge amounts of computing power provided by ASIC mining rigs. The buck converter that powers the ASICs has to be small and efficient to enable high-density mining rigs with minimum heat generation. In this design solution, you learned how a two-phase interleaved buck converter with a coupled inductor provides a highly efficient solution in one third the space compared to more traditional implementations.